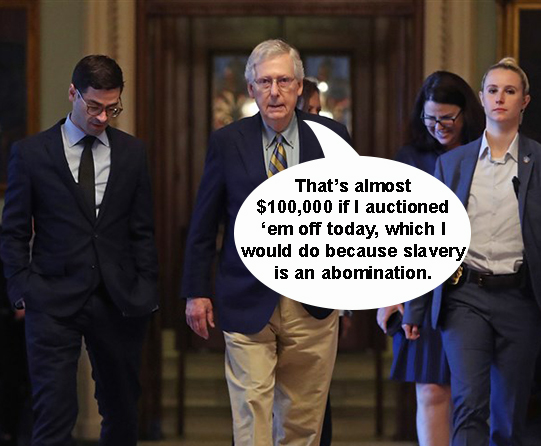 Senate Majority Leader Mitch McConnell (R-Ky.), on Tuesday confirmed that he is a descendant of slave owners and repeated that he still opposes government reparations for descendants of American slaves. Branches of McConnell’s family owned at least 14 slaves, most of them children, according to the 1850 and 1860 census records. In the 1860s, the average slave girl younger than 10 was appraised at $190, which equals $5,571 in 2014 dollars. The average slave boy in the same age range had an appraised value of $212 -- $6,241 in 2014. Former President Barack Obama’s forebears owned four. "I find myself once again in the same position as President Obama. We both oppose reparations and we both are the descendants of slave owners," he said. “The only difference is that, unless the government reimburses me for illegally taking away my property, I will have no choice but to kill any new bill that comes across my desk.”